Why Punching Down Will Never Be Funny

15
Why Punching Down Will Never Be Funny

Conservative talking heads like Jesse Watters and Lauren Southern don’t seem to understand that slapping someone in the face and saying it’s comedy isn’t enough. 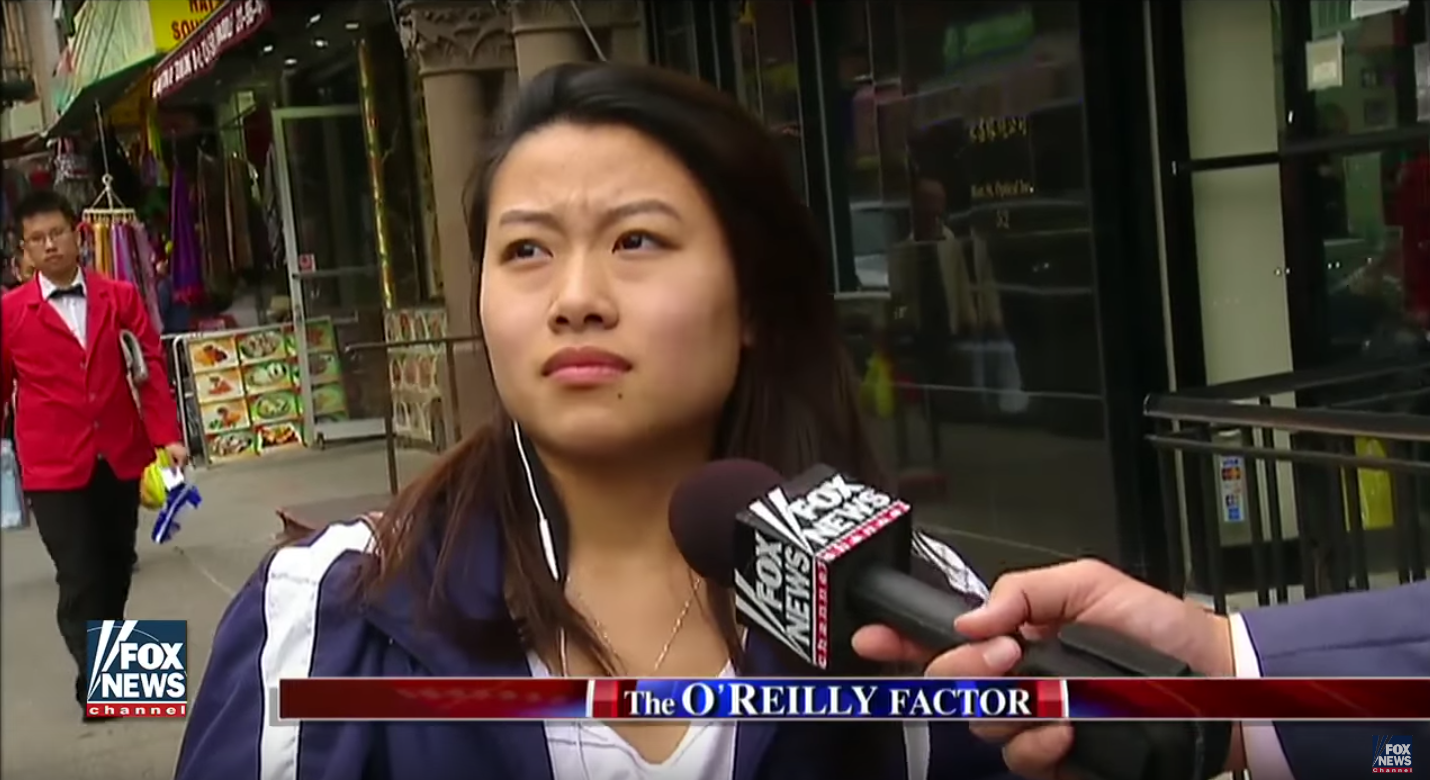 There’s a reason why jesters made fun of kings. Earlier this week, Jesse Watters, a correspondent for The O’Reilly Factor on Fox News, provided us with an excellent reminder that taking someone down a notch is never worthwhile if you’re doing it from above.

Watters visited New York’s Chinatown in light of the many, many comments made about China in the first presidential debate in late September. And as one does when they speak to Chinese-Americans, Watters asked people if they knew karate (which is Japanese), asked if he should bow as a greeting, got a foot massage, and seemingly willfully botched the Chinese language. The segment was spliced with clips from Chinatown and of Mr. Miyagi from Karate Kid (JAPANESE), and even used that “stereotypical Chinese nine-note riff” during the title card. Later in studio, Watters and Bill O’Reilly joked about how the Chinese are too polite a people to just walk away from the microphone to begin with.

“When you go down to Chinatown, seems like everybody was aware of what’s going on,” O’Reilly said. “Some people say it’s very insulated and they don’t interact with American politics, but it looked like everybody knew what was going on.”

Watters grinned and laughed. “You thought people knew what was going on?”

Meanwhile, in Canada this week, Lauren Southern of The Rebel (Canada’s answer to Breitbart, a like-minded network run by a man who once wore a niqab on his defunct TV show to prove…something) did a segment related to the country’s Bill C-16. The bill, introduced in May, would amend the Canadian Human Rights Act to include protection for trans people. Southern visits a doctor’s office, secretly recording the encounter, telling the doctor that she’s “been a gender-nonbinary person for a year now” and that she uses male pronouns. In order to get her gender changed on her government-issued identification, she needs a doctor’s note. The doctor, naturally, gives it to her, because what kind of monster wants to change their identity on their health card just to trick the government? (To be clear, it doesn’t appear that Southern is trans. She also attended a trans rally yesterday at the University of Toronto, did not disclose that she is a “journalist,” and told the crowd that she’s trans. Later that day, she mocked everyone for clapping for her.) The Rebel and Southern are, at this point, well known for these faux-gotcha stunts, but this hit an impressive new low. (Until this, at least.)

The purpose of both segments was to be funny. Watters was trying to show the apparently inherent hilarity of Chinese culture — which, if it is still unclear, white men who look like the offspring of Joe Francis and Ross Geller should not do — and Southern was trying to prove that the Canadian government is in such disarray that anyone can lie to a provincial agency. (She suggests in the video that people prefer “feelings” over “objective honesty,” but again, she’s the one lying on her paperwork.) So in theory, these are supposed to be either funny segments, taken lightly in the case of Watters, or scathing and humorous takedowns of institutions, in the case of Southern. In reality, the first is blatant racism against both individuals and an entire ethnic group, and the second is blatant transphobia against a group that is just now beginning to get the most basic consideration from a federal leader.

Satirical shows like The Daily Show and The Colbert Report do and did pointed topical humor well, particularly when it was interview-based. Colbert made fun of overpaid, hyper-privileged screaming television personalities who added nothing to political conversations. The Daily Show correspondents went to the Republican National Convention and made fun of respectability politics and the inherent whiteness of the GOP. Even then, the segments were hardly mean-spirited, but rather tongue-in-cheek and heavily researched. They attacked ideas above attacking individuals (unless given a figure like, say, Donald Trump) and their jokes were rooted in the absurdity of injustice, or the clear failure of the government, as opposed to finding Chinese people funny.

The argument has been that liberals (big and small L) are funnier, that it’s more fun to go after Conservatives or Republicans than it is to go after Democrats. But the political slant has remarkably little to do with why The O’Reilly Factor and The Rebel fail so miserably at being funny. There are plenty of left-wing politicians or policies to make fun of. I’m surprised no one took more opportunity with Anthony Weiner, at least until the story got too dark, and Justin Trudeau is just a Superman cowlick atop a rolled-up baby-blue oxford. (While Trudeau is certainly teased for being too handsome and possibly a little dumb, the content of his message or policies aren’t always picked apart with the same detail.)

The real difference is that comedy shows or segments that are legitimately funny always punch up. Instead of wasting their time going after people who are typically in the minority, they go after people with tangible power that’s being abused. A basic tenet of humor — and I mean real basic, we’re talking ancient Greece here — is that your best stuff will come from going after people bigger than you. But Watters and Southern, and their respective networks, are too dedicated to maintaining the status quo to be remotely entertaining.

What both of these segments prove is that there’s nothing funny to be wrung from punching below your weight. Trans people, people of color, immigrants, ESL immigrants — whoever might be considered a minority — are the worst targets, because comedy inherently requires a shift of power. People who are targets merely for existing are already operating at an inherent loss; the real gold is in taking a shot at someone who thinks they’re invincible. At comedy’s core is risk, and there’s no risk in making fun of the already-mocked. 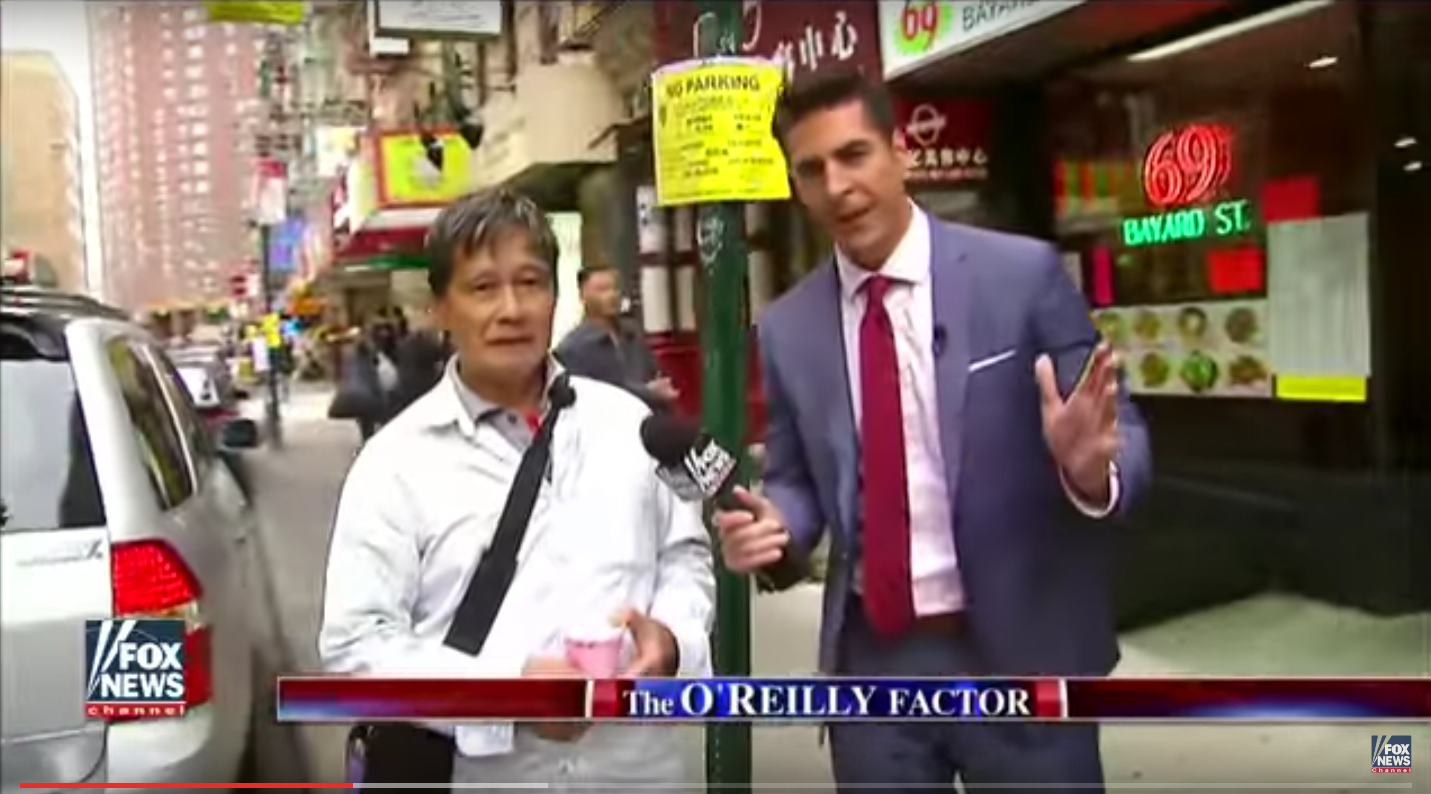 The same trouble crops up when we have broader discussions about social justice or minority rights, particularly on platforms like Twitter, where it’s easy to drop a pithy line without context. So much of the anger around, say, black people asking to not be killed by the police comes from people who are at no substantial risk themselves of being killed by the cops. Men who send women sexist comments, cis people who refuse to understand a trans perspective, white people who become angry when people of color don’t watch their tone — it’s all presented with that “it’s just a joke” slant, as if a joke can blur any clear insult. The reality is that it’s actually about making sure a historically ignored group stays ignored or maligned.

A particular version of the reaction online to both of these videos is a fine microcosm of prejudice masked as witticisms: Users angry that we’re not referring to Southern as “him” now that she changed her paperwork, others even angrier that Watters released an apology hours after his segment went live. There was, of course, criticism of both segments, but there’s always someone on Twitter to defend the indefensible.

In the last few years, there’s been plenty of concern-trolling over whether comedians and comedy can still be funny if everyone is so easily offended by the work. The argument is that audiences are more sensitive, less willing to “take” a joke, and so the art form suffers for it. But this fundamentally ignores that making fun of the weak has never been funny. George Carlin talking about the seven words you can’t say on television was funny because he was taking on an establishment with arbitrary rules. Amy Schumer making a rape jokeabout Hispanics isn’t funny because there’s no analysis of where the power is. The same is true of how we talk about social issues online: What worth is there in getting angry when you’re going after people who have nothing to give you? The mistake is always in thinking that power is being taken from you, rather than realizing that people who have routinely been Othered are simply trying to give themselves power.

Using comedy as a tool to abuse the already abused isn’t just deeply unfunny; it also reveals a lack of understanding of how power is structured. Viewers wanted Jimmy Fallon to call Donald Trump a racist, not tousle his hair like Dennis the Menace. Southern attacking trans Canadians merely because there’s a possibility that their system might be abused in order to get a change of documentation, or Watters mocking Chinese-Americans because they’ve been roped into commenting on an election hardly speaks truth to power.

“It’s gentle fun,” O’Reilly said to Watters in the studio after the segment aired, trying to get ahead of the response. “I know we’re going to get letters — it’s inevitable. But it was gentle fun.” Late yesterday, Watters did offer a barely there apology on Twitter, saying the segment was “intended to be a light piece” and “I regret if anyone found offense.” After Southern’s segment went live, she tweeted a 😉 in response to the criticism, along with, “can I be black? Genuinely curious” and “I also can’t wait to see the police search for me stating ‘look out for a black male.’” For both, there was no intended purpose beyond offense masked as humor. But slapping someone in the face and saying it’s comedy isn’t enough.