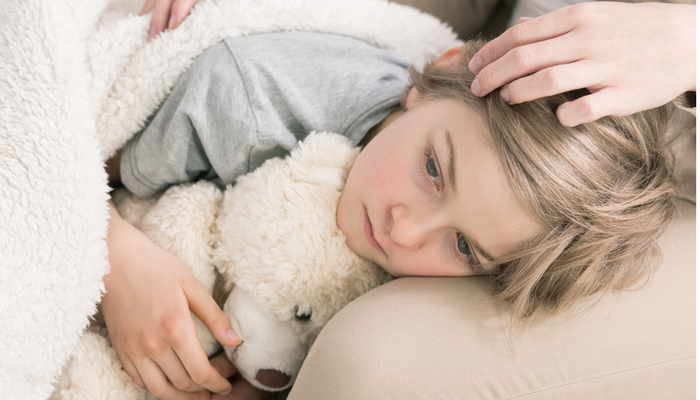 Before I left home to catch up with a girlfriend over dinner, I threw together a gourmet feast of chicken nuggets, broccoli, and apple slices for my children. I appreciated my husband holding down the fort for the evening and didn’t want to throw any new food curveballs that would leave him dealing with tantrums before bedtime. As I rushed to kiss my 4-year-old son and 20-month-old daughter on my way out the door, my son mentioned something about chickens that I didn’t quite catch. I told him to behave for his dad and to be helpful with his sister and off I went.

As I sat down at the table before my friend arrived, I noticed a text on my phone.

“Heads up. Our son now knows that people die. He is not happy.”

Our dude is sensitive, like, can’t-listen-to-acoustic-love-jams-on-the-radio-without-crying levels of sensitive. So I knew this was going to be a doozy. My husband has the dad thing down, so I trusted he could handle this unforeseen circumstance on his own, and I enjoyed my time with my friend.

When I arrived home that night, the kids were in bed. My husband and I sat down, and he shared the night’s events with me.

That comment I didn’t quite catch from my son on my way out? It was about the chicken nuggets and how they weren’t real chickens. We try to give stuff to our kids straight for the most part, so my husband told him that, yes, he was eating real chickens. We’ve had this exact exchange before. Our son will show a disconnect between the meat on his plate and the farm animal it is named for, and we will correct him that they are the same thing. It goes in one ear and out the other, and conversation returns to things like what he did at school that day or whether it’s time for dessert yet.

But this time, something small clicked. “But the chicken nuggets don’t have feathers.”

Well, the chicken’s feathers get removed before we cook it.

Our son laughed. “So the chicken is naked when you cook it? Won’t it be cold?”

“The chicken doesn’t feel cold because it is killed before the farmer takes its feathers off,” my husband answered.

And there it was.

My son asked if all chickens get killed, and my husband told him that some get killed and some just die, but that they all die eventually.

“Do all animals die?”

His father heard his tone change a little. “Will my pets die?”

We have two cats and a dog. Generally, our son isn’t very interested in them. But they’ve been a part of our family longer than he has been alive.

I can’t think of many things sadder than a 4-year-old crying over the thought of losing his pets one day. His father tried to console him, but it was not going to be that simple.

“Do people die too?”

This is not a concept he’s ever had to understand, and not one we as parents thought we would have to explain to him just yet. I cried as my husband recounted the story to me, not just because mortality is scary and sad, but because this was the first bit of childhood innocence leaving our son. And at 4-years-old. Over fucking chicken nuggets.

My husband continued to relay the conversation to me, both of us getting emotional. He told me how our son asked if we were going to die, and how my husband told him not for a very long time. My son cried that he didn’t want us to “leave.” I stopped my husband.

“Did he ask what happens? After we die?”

No. And thank the damn universe because we had no clue what to say.

My husband and I are atheists. We are raising our children secularly. We believe that when we die, that’s pretty much the end of the story. No afterlife. No heaven. No coming back as a ghost and haunting people who left their shopping cart in the only available parking spot at Target. We believe that when you die there’s nothing else. And that can feel sad or scary sometimes when we think about it. But we won’t care when we’re dead because we won’t know because we’ll be, you know, dead.

And while that may be what we subscribe to, it’s not exactly something we want to tell our 4-year-old. Not yet.

I started scrambling, sure that this question would come up in the morning. What were we going to say? I reached out to friends, and one mom sent me the answer we were hoping for. She told me about how her grandmother died the year before and her young daughter was so upset. Her husband ended up telling her that when we die, we become stars. When she missed her great-grandmother and wanted to talk to her, she could pick out a star and find her.

It was perfect. It wasn’t theistic, took away some of the fear of the finality of death, and gave something tangible to comfort our children in a time of loss. It also went beautifully with one of my favorite quotes from one of my favorite atheists, Carl Sagan:

“The nitrogen in our DNA, the calcium in our teeth, the iron in our blood, the carbon in our apple pies were made in the interiors of collapsing stars. We are made of starstuff.”

The next morning didn’t come with tears or anxiety. My son woke up happy. I asked him how he was feeling, and I asked about his talk with his dad the night before.

“He told me animals die and people die.” His voice was calm and matter-of-fact.

Do you have any questions about that?

“Do we have a video of the chicken dying?”

As unexpected as the previous night’s explanation of human and animal mortality went, I was even more surprised to find myself in possible PETA snuff film territory. My mind was flooded with the gruesome Meet Your Meat videos of factory farms. I started thinking of how I was going to feed my son once he inevitably declared himself a vegetarian when I can barely get him to eat vegetables.

No, I told him. We don’t have any videos of the chicken dying.

And with that, I was reminded I have a 4-year-old, capable of shifting gears on a dime. Gone was the worry about his ability to cope with the concept of our short time on Earth. It’s been replaced with the hope that he will just become a vegan and not a serial killer.