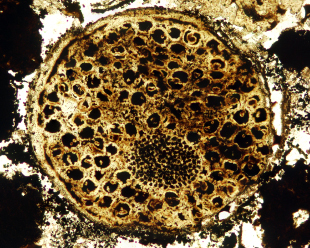 Paleontologists have unearthed new remnants of a mysterious organism known as Megasphaera. The 600-million-year-old fossils, about 0.7 millimeters in diameter, were discovered in southern China’s Doushantuo Formation. Scientists from the Virginia Polytechnic Institute and the Chinese Academy of Sciences announced the finding last week (September 24) in Nature. Although the fossils are likely the remains of multicellular eukaryotes, it’s unclear whether they represent algae or early animals.The fossils show groups of cells enclosed in a thick envelope. Fossils with varying numbers and sizes of cells may indicate different developmental stages. These patterns of cell division and differentiation, the researchers report, are strong evidence of multicellularity. The new fossils therefore contradict previous interpretations of Megasphaera as sulfur-oxidizing bacteria or single-celled protists.Paleobiologists have agreed for nearly a decade that Megasphaera were multicellular, according to Nicholas Butterfield of the University of Cambridge, who was not involved in the study. This study reveals “some specimens that show some new features, but it’s not clear what exactly they mean,” Butterfield told The Scientist in an e-mail. He also noted that evidence of multicellularity has been found in fossils more than twice as old as Megasphaera.Among the most intriguing features found in some of the fossils were clusters of small, tightly packed cells, which the authors call “matryoshkas” for their resemblance to Russian nesting dolls. These may be reproductive structures, similar to those found in the modern colonial green algae Volvox.The organisms show notable similarities to algae, but also to animal embryos; the authors describe both as “partial but imperfect interpretive analogues.” More examples are needed to resolve the life cycle of Megasphaera and examine its relationship to known groups of organisms.“How these actually fit into the family tree of animals and other multicelled organisms is still a big question,” study coauthor Shuhai Xiao, a geobiologist at Virginia Tech, told The Washington Post. “It’s very different from the stereotypical animal development, so it’s hard to say” whether Megasphaera fossils represent algae or animals, Xiao said. “They look alien to us.”