Ever since the invention of the automobile, the creative minds that come up with new designs—or at least creative ways to use old parts—often bring us designs we never realize we want or need till we actually see them. Unless they’re just too funny or weird, and then we wonder just what the creator was thinking. From the truly creative and likely useful, to the creative but completely pointless and useless, cars have worked their way into our being so much so that we can’t live without them, even if they’re just for a laugh!

To be truthful, this looks like something out of “Hello Kitty.” It must be all that pink and red. But it would be good for someone who needs something tiny to drive and they don’t have any groceries to buy.

Naturally, this raises all kinds of questions. Is the guy in the tub the one that built the cycle? Did a friend do it? And is he singing the old “Splish-Splash” song from the ’60s?

Sometimes you have to get up and take the bull by the horns. It looks like this bus not only took the horns, but put them on as well. It’s probably best if we stay out of this bus’s way.

Only in Japan would something like this exist. But the question remains—how do you drive the darn thing?

So, does that mean that whoever drives this is going to be a “bombshell?”

This rather strange, motorless vehicle is actually somewhat “Flinstones”-like, but you don’t use your feet to get it on the road. You use the power of gravity to drive and steer. Pretty sleek so far, wouldn’t you say?

Anyone who has read the old Richard Scarry books knows what and whom I’m talking about when I say that this car could easily be driven by Lowly Worm and Huckle Cat from “Busytown.”

Buying groceries at Mach 5 speed just got a whole lot easier, and it spares the main shopper from the emotional meltdowns of any little ones they have in tow.

There’s clearly no doubt that this car would win a million medals for all its positivity. After all, have you heard of a tooth-bearing car with any cavities?

This is what’s called old-school “Horse Power.” A car driven by an actual horse. They used to call them carriages, or even hackney cars once upon a time.

Someone obviously does not want to let go of their stuff. Time for an intervention, perhaps?

Just the thing when you want to scare the pants off other people going down the highway. Or even if you don’t scare them, you can at least elicit a few laughs.

This is what would happen if you crossed a car with a mutant lizard with pink legs, and then painted the body all sorts of weird colors: Mazda-Zilla tromping about town destroying things.

Definitely not a car for people with long legs or lots of groceries to get. Best move along to something a bit bigger.

If anyone’s familiar with Nyan cat, here’s a vehicular tribute to the singing rainbow pop-tart feline.

Yes, it does look like something from “Austin Powers: Goldmember.” It’s likely someone had leftover shag carpet to use and managed to reupholster the interior.

Go on, “shoe” me around town. Once you’ve done that, I’m pretty sure I’ll be able to “wing-tip” it, but don’t wear me down at the heel with too much sightseeing.

Double-decker buses in London are one thing, but a triple-decker? Are you sure there’s not a mini parking garage in that second deck? 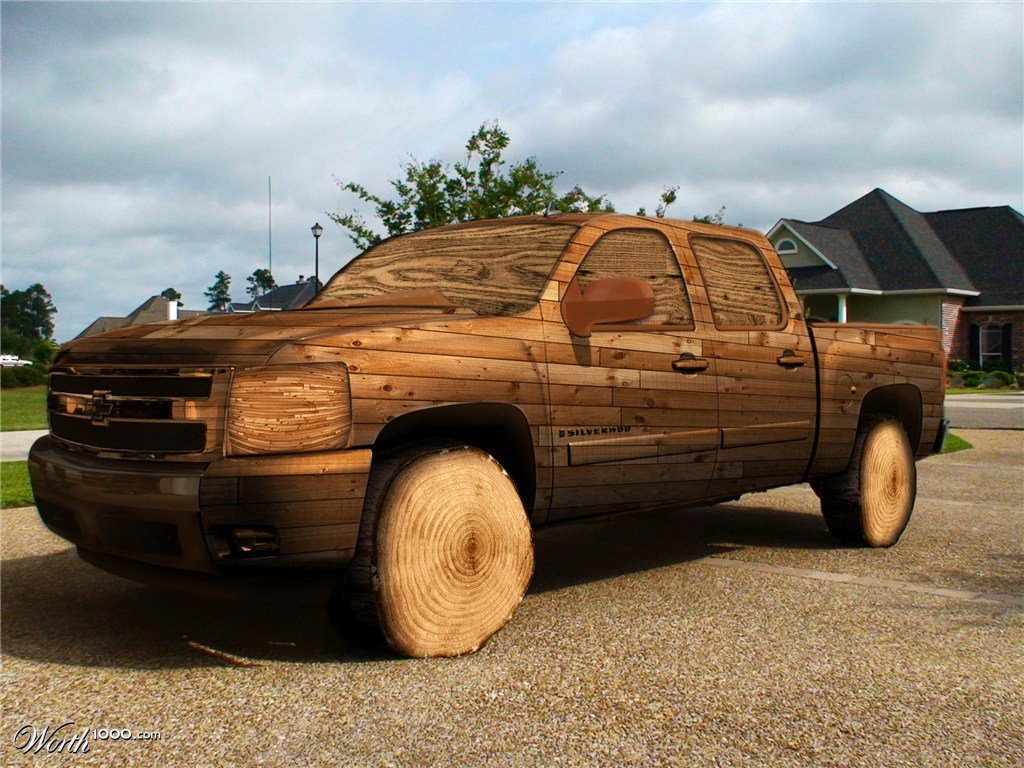 A truck no one will be able to drive because it’s all made of wood. And it’s clearly a fire hazard to begin with. So the point of this truck is?

The thing you have to wonder is: is all the junk symbolic of how much stuff we, as human beings, let go to waste?